Original Peter was started by two record collectors, Jonny Trunk (of Trunk Records) and Ed Griffiths (the man who started blaxploitation.com) Both have been collecting records since the 1980s.

Record bags as we know them today started appearing in the late 1980s. Made of standard black nylon with a fold over front (and possibly a big logo splashed somewhere) they were really the first “man bags” around. These bags were great for the job, but normally perished after about 2 years of use. Now, Ed and Jonny both like really well made records, they also both like very well made clothing. And when it came to replacing old, worn out record bags last year, they both realised they could not find a proper, grown up, sartorially splendid, long lasting record bag. The sort of bag that would match a good, sturdy pair of English shoes.

One evening, out of a frustrated record bag discussion came the idea: to make a record bag themselves. A bag that would be based on a few simple principles. It has to be well made, to last a lifetime. It has to improve with age. It has to fit loads of records inside. It has to feel good on the shoulder. It has to look good on the shoulder. We’d both want one. As our conversations continued, we hit upon the idea of using a traditional British bag manufacturer, one who’d been making classic hunting, shooting and fishing bags for hundreds of years. We found the perfect manufacturer, and the Record Hunting Bag was born. 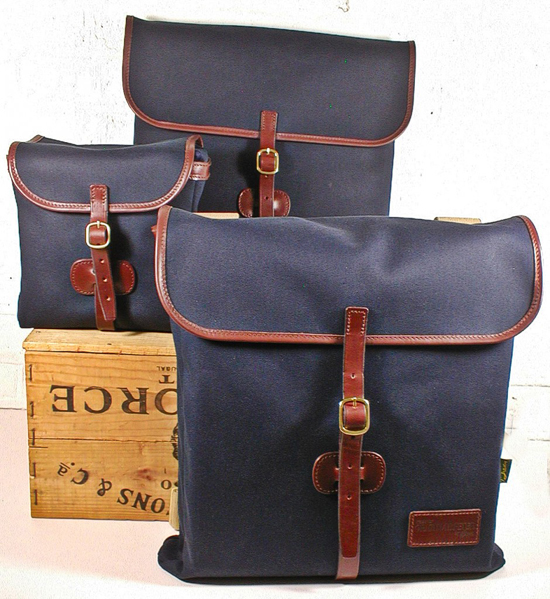 The result is a beautiful and timelessly stylish bag that is simply perfect for records and is handmade to an extraordinary standard using the finest and most resilient materials. It’s made for records but remains practical for countless other usages, and is constructed so well it will probably live longer than you.

Once we’d made the bags we had to call ourselves something. We decided we’d like a name that came somewhere out of record collecting, the title of a rare label, or music scene or catalogue number. We settled in the end on Original Peter, which is a classic British Jazz record. Recorded in 1969 by Mike Westbrook, sung by Norma Winstone and issued by Deram, it apparently was the theme to a strange arts show on BBC2 way back in the late 1960s. According to legend, Original Peter was a acrobat who used to perform handstands on chairs during jazz gigs. Listen to it here.